Between 1938 and 1942, over 2,700 prisoners of war from the Republican forces were divided into five work battalions and forced to work as slaves of Franco’s regime on the section of the Val de Zafan railway line being built between Alcanyis and Tortosa. Xerta was a key location as the site where many prisoners were kept and much of the work carried out.

The groups, known as ‘worker battalions’ (BBTT), were made up of ex-fighters from the People’s Army of the Spanish Republic who had not undergone a judicial trial but were classified as either ‘disaffected and hostile’ or ‘possibly disaffected’ with the new dictatorial regime. From 1940 onwards these groups were reorganized and called ‘disciplinary battalions of worker soldiers’ (BDST). They consisted of prisoners of war, ex-fighters who had finished their military service under the Republican army and were classified as ‘hostile’, as well as deserters from Franco’s army. In both cases, the prisoners were housed in concentration camps, classified, and distributed accordingly into different punishment units.

The first of these Francoist slaves were sent to work on the railway line under construction in the spring of 1938 (BBTT 66 and BBTT 68), following Franco’s nationalist forces’ conquest of the right bank of the River Ebro. The principal task of the forced labour was to speed up the process of laying the new tracks. By mid-June they had completed the work as far as the Pinell de Brai station (in the Terra Alta region). Later, as they moved on to work further downstream in the Baix Ebre region, the activity was halted due to artillery fire from the Republican forces on the left bank. During the Battle of the Ebro, having the line open as far as Bot facilitated the arrival of supplies and soldiers for Franco’s forces.

Work started again towards the end of 1938 as more prisoners were brought to carry out forced labour. Their main tasks involved laying down the ballast for the line between Valljunquera and Pinell de Brai, which also meant quarries needed to be dug out at several nearby sites under tough working conditions, laying the rails between Pinell de Brai and Aldover, and rebuilding infrastructure such as viaducts damaged during the fighting. 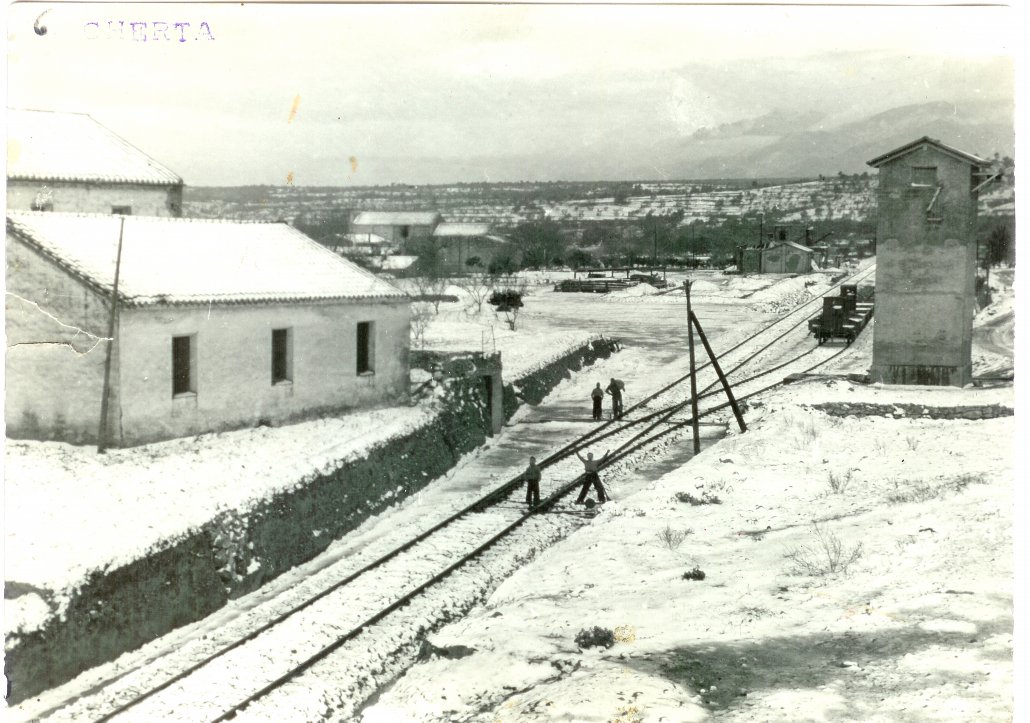 Railway line under construction at Xerta, covered with snow. Prisoners in the middle of the photo. Photo: Roger Aviñó. 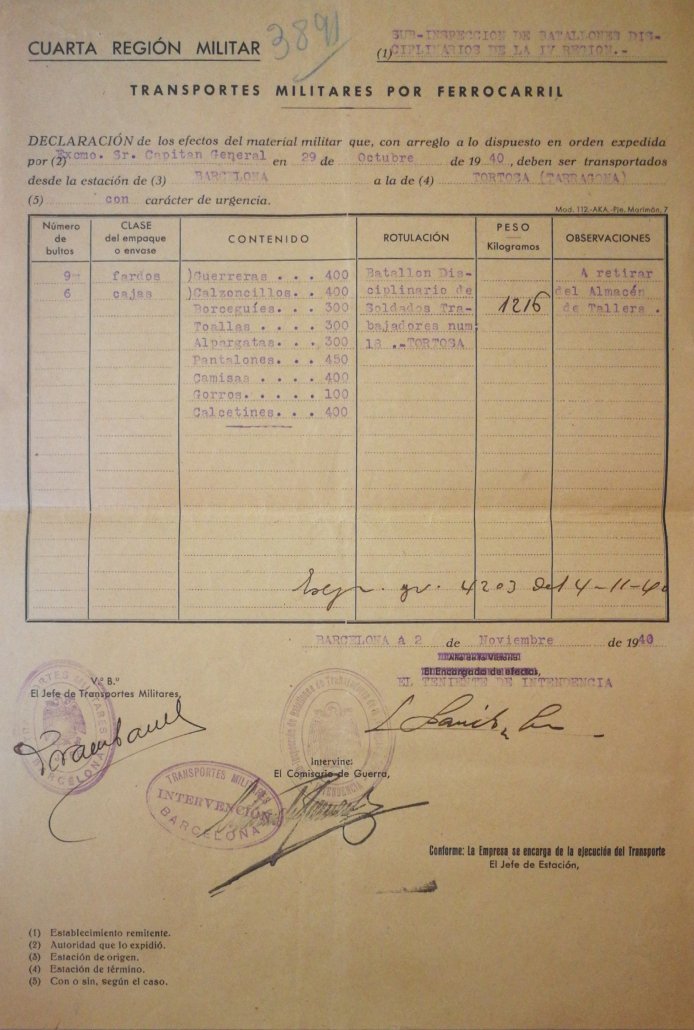 Document relating to delivery of a package of clothes from Barcelona to Tortosa station for the prisoners of BDST 18 in 1940. Image: Xerta town archives. 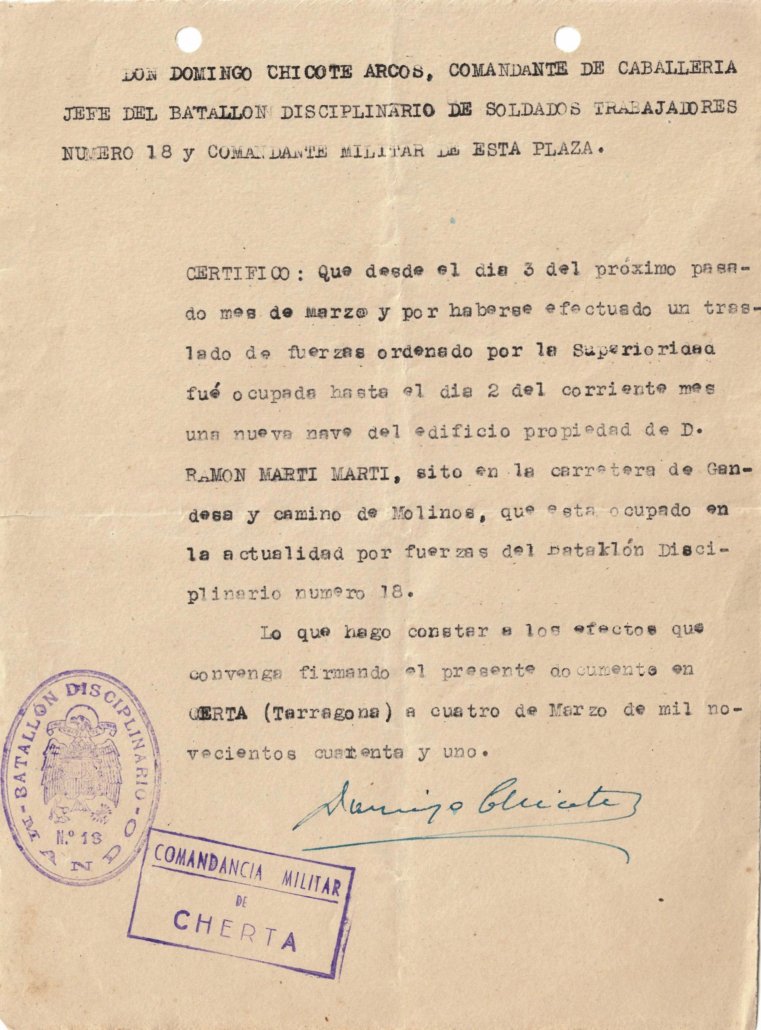 Document relating to the BDST 18 battalion being housed in a building in Xerta, 1941. Image: Roger Aviñó. 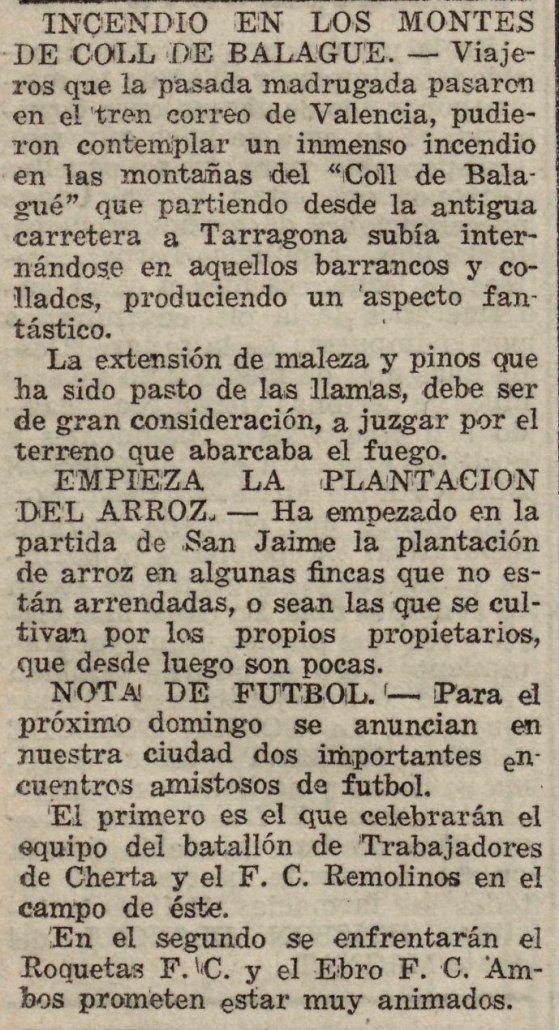 As the work on the railway gradually moved down the valley, the command centre was set up at Xerta where most prisoners were located. Part of the BBTT 69, BBTT 163 and BDST 18 groups worked in and around Xerta up until 1942. The warehouses belonging to the old cooperative located beside the railway were used as quarters for the prisoners. Further north, temporary camps were also set up outside the village in the Les Valls and Xalamera areas.

The presence of such a large contingent of prisoners in a small village like Xerta did not go unnoticed. For example, 1,307 prisoners carrying out forced labour were housed in the village in 1940. The work was hard and dangerous, requiring a lot of physical effort, and always outdoors whatever the weather. There were many accidents, and prisoners had little rest and a poor diet. There experienced frequent physical punishments, constant ideological drilling, and a permanent sensation of exploited slavery.

The Francoist-run local council collected information regarding the prisoners for other public administrations and could request the prisoners’ free labour when they deemed it necessary to help in emergencies. For instance, in October 1940, members of one of the work battalions were sent to repair damage caused in the village by floods. On another occasion, they carried out restoration work on the Sant Zeno chapel in Carrer Major street.

Living in the area for so long led to friendly relationships between many of the prisoners and local villagers. A football team known as ‘Batallón de Trabajadores de Cherta’ (Xerta workers’ battalion) made up of locals and prisoners played friendly matches against other teams from the area and was the embryo for the village team to return after its absence during the Civil War. Various romantic relationships came about between prisoners and soldiers and women from the village.

Xerta football team made up of Republican prisoners and locals, 1940. Photo: Antoni Cid.

Group of prisoners from BDST 18 beside the railway in Xerta. José Gómez Márquez is the first on the right. Photo: Arcángel Bedmar collection.

The prisoners were brought here from all around the Spanish state. Among the Catalans were soldiers from the conscription of men born in 1920, known as the ‘Lleva del biberó’ (baby bottle conscripts) due to their young age. One of these recruits was Joan Llarch Roig from Barcelona, a fighter in the Battle of the Ebro and one of Franco’s slaves as a member of the BBTT 69 forced labour group sent to work on the Val de Zafan railway. He wrote about his experiences in one of the first books to talk about this topic. 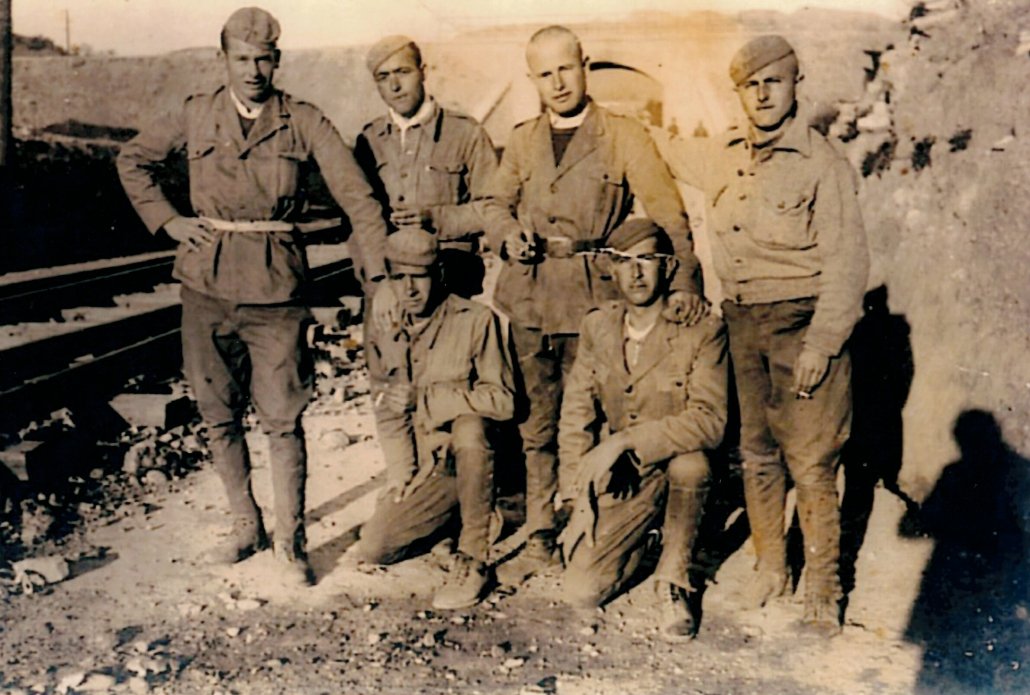 Group of prisoners from BDST 18 beside the railway in Xerta. José Gómez Márquez is the first on the right. Photo: Arcángel Bedmar collection.

‘Early in the morning, the soldiers on guard woke the prisoners up by shouting loudly and harshly. The prisoners had spent the night sleeping on the floor with blankets spread over piles of dried grass. They left the barn and lined up outside in three rows to be counted, using the same blankets to protect themselves from the early morning cold and wind. They all looked worn out before the workday had even begun. With eyes barely open and in a miserable mood, the routine of hard work and a resigned acceptance of the inevitable were reflected in the prisoners’ expressions. Indifference and a sad fortitude towards their misfortune. After they had been counted, without a proper wash as the running water was far from the sleeping quarters, they splashed water on their faces from a foul-smelling puddle and, if they had tobacco, lit their first cigarette as they were marched off to the quarry. Here they worked until dusk, when they came back to the abandoned and isolated farm buildings where they slept once more’.

Extract from Batallón de trabajadores [Work Battalions] by Joan Llarch (1978), published by Plaza & Janés. The day-to-day life of forced labour at a ballast quarry in Puigmoreno (Alcanyís) at the end of 1938.

‘In the workers’ battalion at Xerta, where the prisoner Cristóbal Carrier Díaz, from Santa Cruz, was stationed, the sergeant often reminded the prisoners that the “reds are fatherless”. From the same battalion, José Gómez Márquez, remembers that every time a priest came to say Mass, the prisoners had to fetch him and take him back manually pulling a kind of trolley-car along the railway tracks. One of the punishments (given by the battalion sergeant) involved forcing prisoners to run with sacks full of soil fastened to their backs. Afterwards, in a closed room with two guards, they were lashed.’

Extract from Los puños y las pistolas. La represión en Montilla (1936-1944) [Fists and guns. Repression in Montilla], by Arcángel Bedmar (2019), in which two prisoners from Cordoba in the BDST 18 battalion remember their time in Xerta.

Following four years of forced labour, construction of the railway between Bot and Tortosa was finally completed and on 10 September 1941, coinciding with the local town festival in Tortosa, the first journey to inaugurate the new stretch of line took place. A few months earlier, in April, the Public Works Minister, Alfonso Peña, had also paid a visit to inspect the new line. As the train passed through Xerta, the La Vanguardia Española newspaper reported that “the Worker Battalion 18 paid homage to the minister with crowds cheering at the station.” This stretch of the line in the Ebro valley was open for 31 years before it eventually closed down in 1973. The first section of the railway had been constructed years before the Ebro section, with the foundation stone being laid in Puebla de Hijar in 1882. The final planned stretch from Tortosa to the coast in La Ràpita was never fully completed.

Together with the collaboration of the Department of Justice